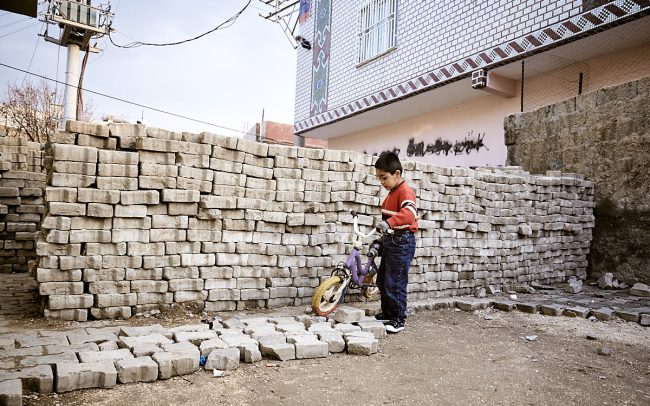 This new „Civil Defense Unit“ unifies PKK („Kurdistan Workers’ Party“) affiliated forces of the armed youth movements YDG-H and YDG-K, expanding in all Kurdish regions in the south and east of Turkey. Most of the fighters are young with many of them under 21, growing up in the cities, partly traumatized with terrible personal histories about raped and executed family members by the Turkish state security forces. Holding up the resistance against those, organized in cells of approx. 50 fighters defending their city quarters. Although the Kurdish movement lacks in fighting equipment and is short of money, their morale and ideology, identifying with the well-tried Leninism, Marxism and Maoism, together with excellent knowledge of the neighborhood make them an urban guerilla force to be reckoned with. So far Kurdish power of resistane reasserted itself officially as YPS in Cizre, Silopi, Yüksekova, Diyarbakır, Idil and Nusaybin. „The Turkish state has wanted for years to annihilate the Kurdish people within the scope of a displacement, physical and cultural genocide policy which continues today with a fascist aggression on the will of the Kurdish people. In response to these attacks, our people are improving their self-defense under the leadership of women and youths.“, said Deniz Bagok, experienced YPS fighter in Nusaybin.

In Kurdish dominated Nusaybin, which is directly at the Syrian border, where before hundreds of people were executed by Turkish special force’s tanks running over them in the 1990s, fighting heated up recently again. Since the 13th of March there have been 63 days of curfew so far in Nusaybin, the 3rd one already since reelection, isolated and cut off from power and water supply, where over 120 people were killed in heavy gunfights in the first two weeks only and a fellow journalist and friend has been detained while covering news for Dicle Haber (DIHA) three weeks ago in Nusaybin. Nobody saw him since. So far 13 DIHA journalists together with 24 other local journalists are currently in police custody. Without them news coverage also for foreign media is more difficult than ever before.

Meanwhile the streets are torn up with bullet-riddled houses and hundreds of paving-stone barricades block the pathways through town and trenches often open up behind them. Huge plastic tarps have been stretched between power poles to block the view of snipers. When night falls, the YPS guerilla fighters sling their Kalashnikovs over their shoulders, cover up their faces and go out on patrol through the streets of Nusaybin. Singing a fighting song and building up barricades, stone after stone.

This portrait series was taken right before the current curfew has been imposed and shows a female and male member of the YPS in particular while training between high barricades in Zeynel Abidin district of Nusaybin.
(End of January 2016)

See a short documentary film we made there (in German only):